The first of its kind, the seating concept that started it all.

As a first of its kind product, Air New Zealand launched Skycouch in 2011 as a flexible game-changing product for everyone to add a little luxury to Economy flight.

In simple terms, it is a product that consists of a row of economy seats that can be turned into a couch after take-off. The seats themselves are nothing special, they are the same economy seats you would normally get but with an additional footrest that can rotate 90 degrees to form a flat surface.

That’s not all, on your long haul flight you’ll also get slightly better bedding and pillows to accompany you. The concept is flexible enough to allow families or individuals a flat surface to either rest, relax or play.

Air New Zealand is not sitting on their laurels with Skycouch and have updated the product since, the latest in 2018 with the introduction of the infant pod and an update to the cuddle belt. It marks a change in approach to the seat – initially dubbed “cuddle class” by the media due to its proposition for couples it has really shed that persona and found a foothold with families. 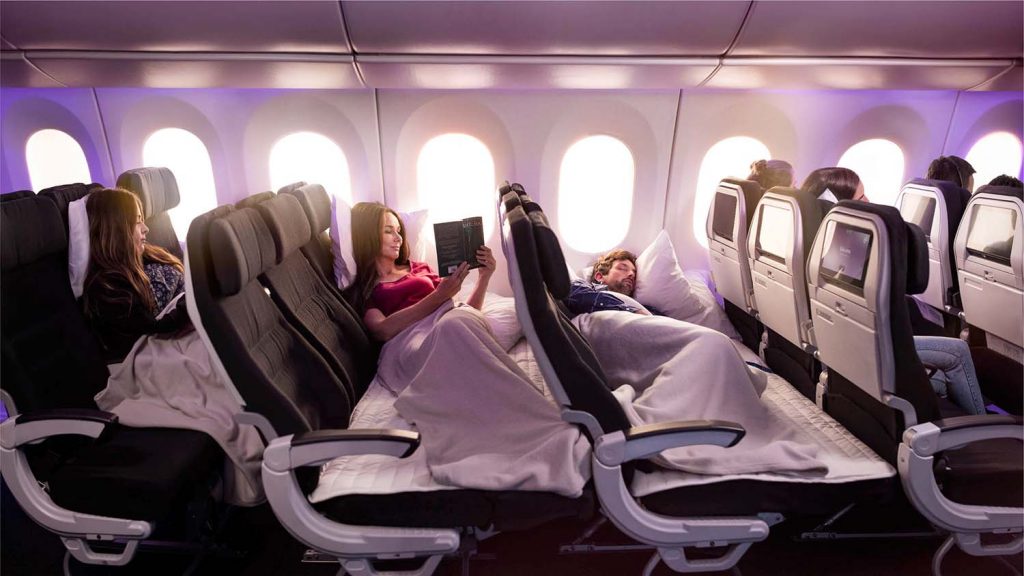 When you book a Skycouch fare you get everything that Economy offers but just the added perk of a couch experience. Importantly, Air New Zealand doesn’t offer Skycouch as its own separate cabin class, rather, passengers can choose it as an ‘add-on’ during the booking process.

While clearly aimed at families it is in fact open to anyone wanting the couch/lounge experience.

For families with young children, a special harness and belt are provided – while small it’s a clear evolution of the product. For young families, you can also make use of Skycouch with little ones in their own infant pod which attach to the seat itself. More information can be found here. Previously they were required to be seated on a guardian’s lap when the seatbelt sign was on.

The Skycouch Cuddle Belt has also been updated. Previously it was only certified to allow two adults (or an adult and child) travelling together to lie down side by side. It now allows two children to use the seat providing greater flexibility to families. 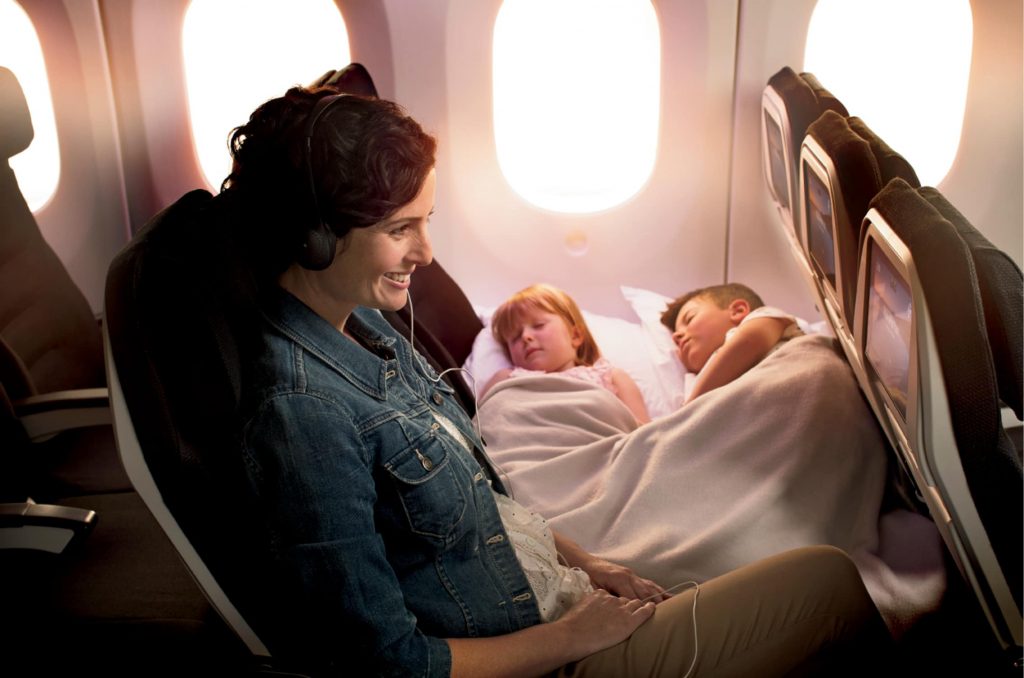 Skycouch prices vary depending on the demand for the flight and the number of people who will use or not use the seat as intended. In other words, Air New Zealand is effectively blocking out a row of 3 seats for Skycouch; a solo traveller will therefore take the same amount of space as a party of 3.

In practice this means individuals wanting skycouch will be paying the most to block out the other two seats while a party of three just need to pay a small suppliant to get the Skycouch experience. What’s more, the cost is wholly dependent on your route – as a rule of thumb, Skycouch will cost you the equivalent of 2.5 Economy seats.

You can add Economy Skycouch to an Economy fare when booking long haul flights online. This is a different approach to Lufthansa which only allows booking of the couch offering at the airport. You’ll see ‘Skycouch on board’ beneath the price if the option is available. You’ll find costs and details when you get to the ‘extras’ page. The airline offers options for one Skycouch, one Skycouch plus an Economy seat or multiple Skycouches.

Skycouch seats are in the Economy cabins of all Air New Zealand’s 777 and 787-9 aircraft. Seat and row numbers vary by aircraft but usually they are at the forward portion of the aircraft, you can find out more using the airline’s seat maps. This is in contrast to ANA Couchii who have their couch seats at the back of the plane.

Skycouch cannot be found on Air New Zealand Airbus A320 (International) planes that serve the Pacific Islands and Australia. The Skycouch is only available on routes longer than 6 hours duration; where the aircraft are used on shorter routes, the leg rests are locked out and the Skycouch seats act as regular economy seats. 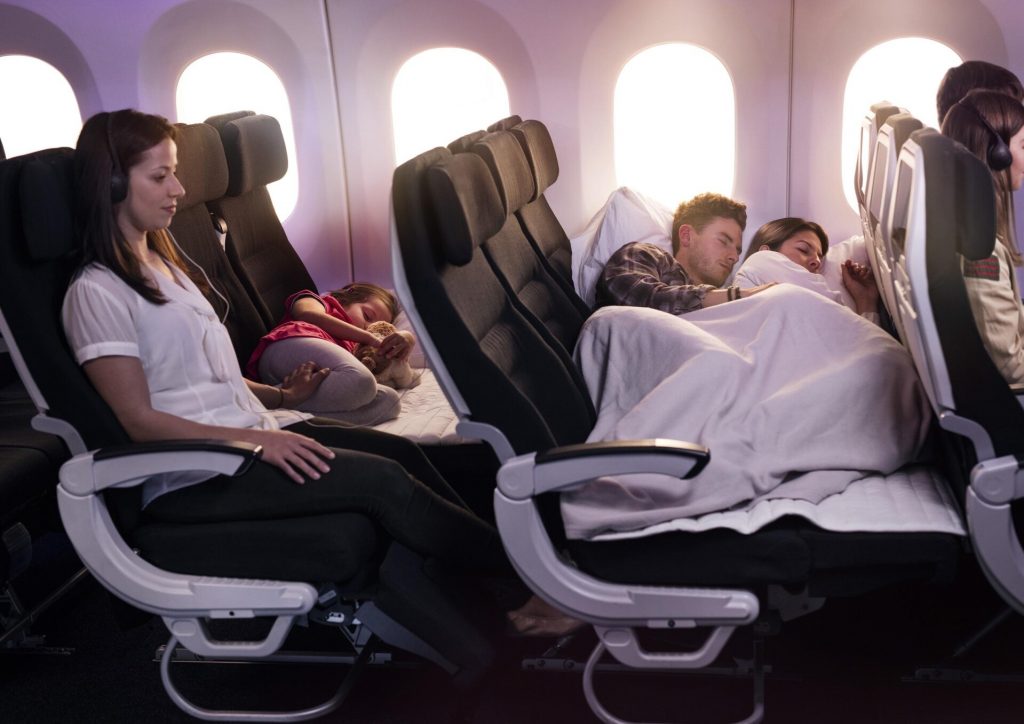 In many ways yes. For those looking for a couples lie-flat experience or somewhere the kids can play safely without disturbing other passengers then it is a game-changer.

For individuals not so much. The cost of entry is prohibitively high and offers less privacy compared to a more premium product offering and fares. When compared to the premium economy seats at least, it’s safe to say that Skycouch is more about comfort and less about service.

Not to mention taller passengers may find it uncomfortable due to the length of the seat.

However, despite an early misfire in Air New Zealand’s marketing as an adult-centric product, it has now firmly established itself as a family-friendly offering. With the implementation of child-friendly equipment upgrades in 2018, the Air New Zealand Skycouch remains an innovative and world-class offering.

Although to what degree is down to the individual, many people have commented that it is comparable to a premium economy product in making such comparisons Air New Zealand needs to be careful not to cannibalize into its premium economy offering. As mentioned Skycouch is more about comfort and less about service when compared to premium economy. 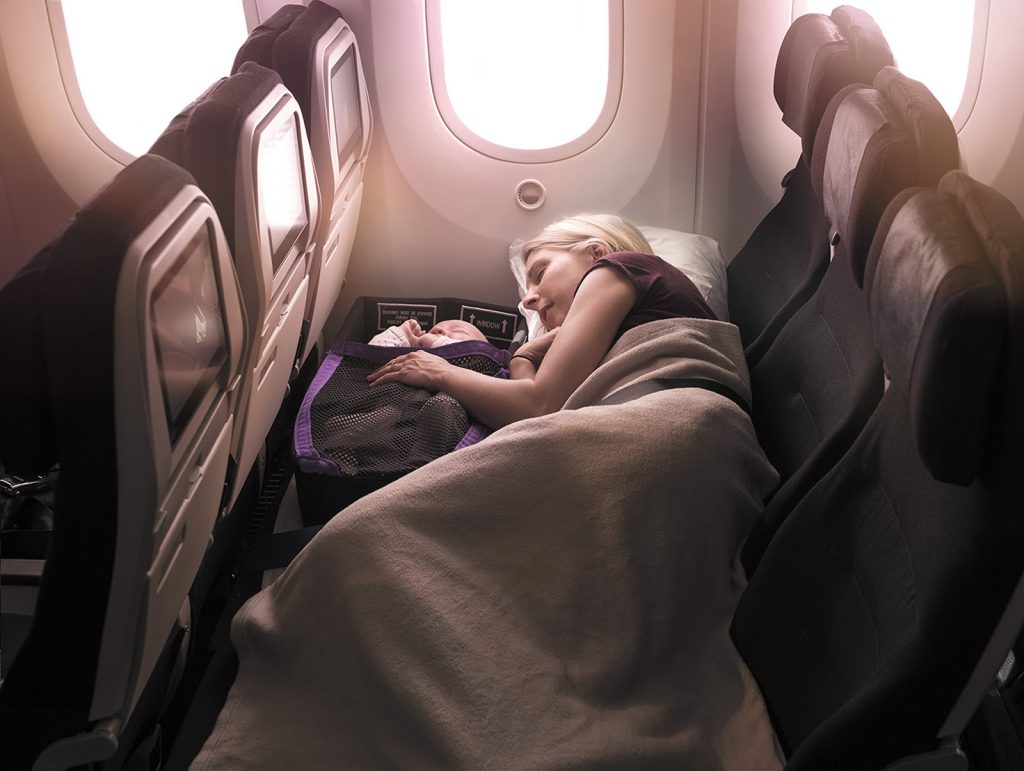 Air New Zealand has since made Skycouch available under licence to other airlines on non-competing routes.  Japan’s All Nippon Airways version called Couchii on its A380’s from Tokyo (NRT) to Honolulu (HNL), French airline Air Austral, which installed the Skycouch on its 777-300ERs, and Brazil’s Azul, which installed a centre quad-seat variant called Skysofa on its Airbus A330-200 fleet.

Other Airlines have gone at it from scratch and have taken different approaches like Lufthansa’s Sleeper Row which offers business class bedding in economy, Air Astana’s Economy Sleeper offers a partitioned section in the front of the economy cabin; Short-lived Air France subsidiary airline Joon offered Cosy Joon, whereby part of the headrest could be detached to add seat depth; and now-defunct Thomas Cook targeted individuals with its Sleeper Seat on its A330’s.

Although not all airlines have found success, China Airlines which dubbed it couch seats Family Couch, introduced the product onboard its 777-300ERs and A350-900s. However, the airline stated last year it would cease the service, reportedly due to inconsistent demand.