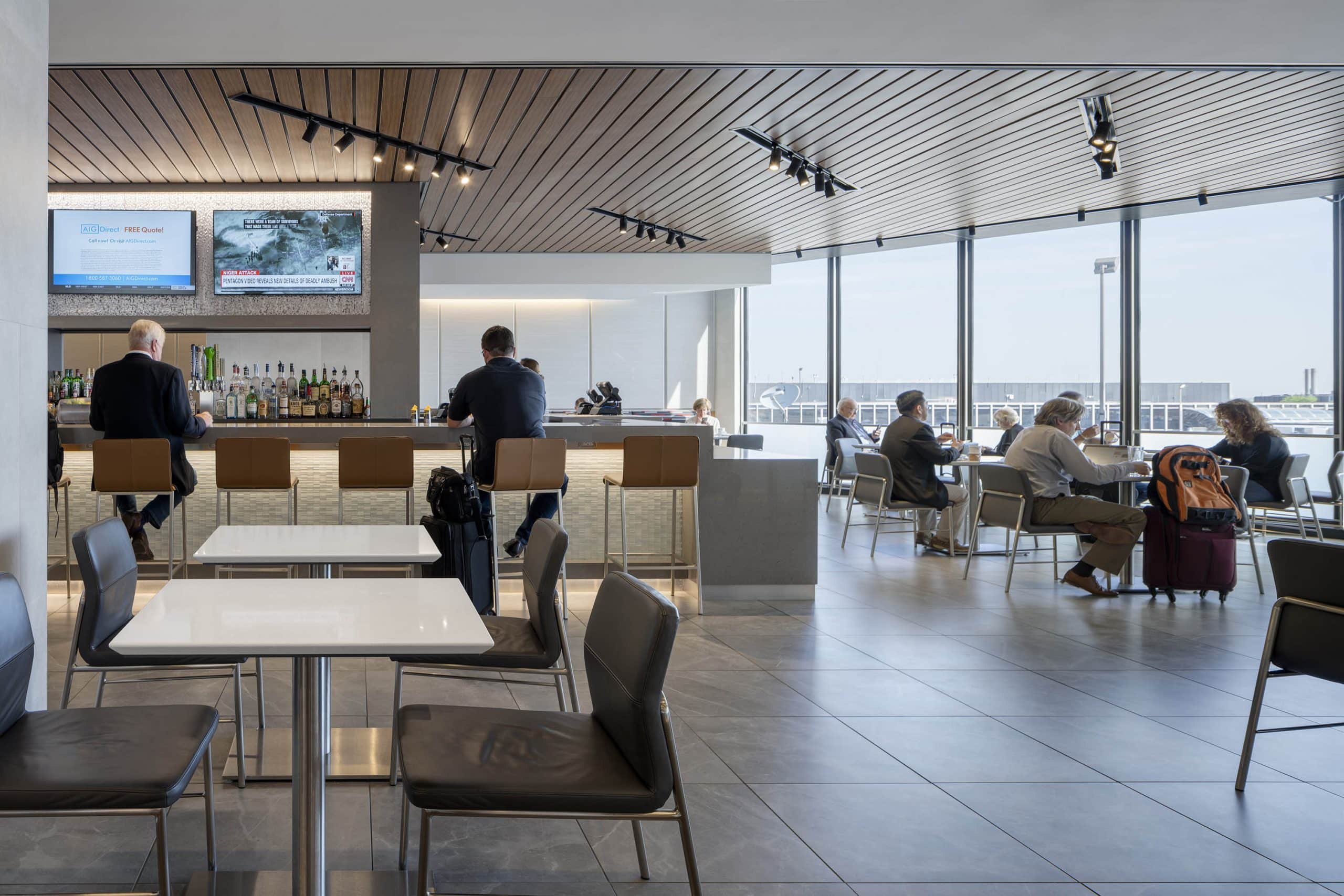 Admirals Club refers to both the membership program and network of lounges operated by American Airlines. The program was started in 1936 to recognise friends of the airline and loyal passengers. Members were called “Admirals”, since American Airlines’ planes were known as the “Flagship Fleet”.

This open membership policy still stands, and today, you can become a member of Admirals Club by paying with either cash or miles accrued.

With Over 60
Partner Lounges

Overall there are 5 ways of getting into an Admirals Lounge – however generally speaking – there will likely only be 2 applicable routes open to the average person. However, with that said, below are the only 5 ways of entering.

Going down the paid route, this is the simplest way to gain access. simply pay the membership fee for the year and your are in.

As you can see, the cost of membership is tied to your AAdvantage elite status tier. The cost starts at US$650 for those without Elite status to free for those holding the coveted Concierge Key.

There is also the option to use AA miles instead of hard cash, but in effect, the value isn’t worthwhile and you are better suited to using the miles elsewhere

You can purchase a One-Day Pass for yourself or another person online, or at certain Admirals Club locations for $59 each. With this pass, a government-issued ID and a same-day ticket for travel on American Airlines, Alaska Airlines, or a oneworld partner carrier, you may enter the lounge on your day of travel.

Should you decide to become an Admirals Club member within 30 days of using your One-Day Pass, $50 of the $59 spent for the pass can be applied to the annual membership.

If you purchase an American Airlines Airpass (which is simply paid-for Elite Status) you are granted access to Admirals Club lounges for as long as you hold an Airpass subscription. Although Airpass isn’t really a cheap option and is only valuable in certain circumstances.

What about a Priority Pass Membership

It’s not limited by your allegiance to an airline alliance and can be used as you see fit. So if you are not a heavy traveller – but do frequent trips on multiple different airlines which wouldn’t add up to elite status – this may be an option to consider.

There’s also the option of going down the credit card route – currently, there is only one credit card that gives you access to Admirals Club lounges, AA’s most premium cobranded credit card, the Citi / AAdvantage Executive World Elite Mastercard.

The primary way this card justifies its exorbitant $450 annual fee is with a complimentary Admirals Club membership. This allows you and two guests travelling with you to enter these lounges.

The real reason this card is such incredible value is that you’re able to add up to 10 authorised users for free, each of whom gets their own Admirals Club access privileges. This applies whether the primary cardholder is flying with that person or not BUT the user must be flying with AA or a Oneworld Alliance member.

Just be aware that authorised users do not get a full membership, just access. It’s an important distinction because their privileges only extend to Admirals Club locations, not partner lounges.

First class passengers on a qualifying departing international or transcontinental flight marketed and operated by American or a oneworld airlines can use the lounge.

Business class passengers on a qualifying departing international or transcontinental flight marketed and operated by American or a oneworld airlines can use the lounge.

between the U.S. and:

Mid- and upper-tier American elites (specifically Platinum, Platinum Pro and Executive Platinum members) can access Admirals Clubs on qualifying long-haul international itineraries Only operated by AA or a Oneworld partner, no matter what class of service they are flying.

Concierge Key members have it even better, as they earn a complimentary Admirals Club membership.

The other alternative is to have elite status with a Oneworld partner Airline. Oneworld Emerald or Sapphire members not with AAdvantage can enjoy access when travelling on eligible itineraries, domestically and internationally.

Although if you are able to, you are better off seeking out one of AA’s flagship lounges instead for better food, drink and service experience. These lounges can be found at Chicago-O’Hare (ORD), Los Angeles (LAX), New York-JFK, Miami (MIA) and Dallas (DFW) and access rules are the same as for Admirals Club (except for access to Flagship First Dining which is only available to passengers travelling flying in first class)

China Southern Sky Pearl Gold customers travelling on any flight marketed and operated by both airlines in any combination also have access.

One-Day pass holders can bring in upto three 3 children under 18.

These members can bring in up to two guests or their immediate family.

(Immediate Family defined as either spouse, domestic partner and/or children under 18.)

Both passengers must be departing on an international or transcontinental flight marketed and operated by American or a Oneworld airline.

Not surprisingly a lounge is made or is criticised based on the number and qualities of amenities it provides.

The Lounge provides light bites and snacks at its lounges ranging from breakfast tacos, eggs and fruit in the morning to soups, salads and cheese’s during the day.

If you want something a bit more fulfilling, most lounges do provide paid for food.

Where permitted there is usually a selection of complementary and paid-for alcoholic drinks.

One of the best features at airport lounges are the shower suites. At select locations, Admirals Club lounges provide such facilities.
However, like all lounges, there is usually a line to access the showers during peak times.

If you are looking to fit a quick workout into your itinerary, the Admirals Club in Terminal A at Dallas/Fort Worth International Airport features a small fitness centre.

At certain locations, the lounge will provide computers, printers and workspaces to enable you to work effectively at the lounge.

Such a trend has been recently to provide electronic content on flights. With the Admirals Club, once you enter the lounge and connect to the wifi, you will be able to access and download an archive of newspapers and magazines to read on the flight.

How to get a Free Iberia Stopover in Madrid